Yesterday I gave you an in depth view of the shelf styling of my built-ins with the promise that today I would go into more detail about how I made them using Ikea Besta units. First things first, a before and after of the space.

That red wall that you see in the back is the wall where the built-ins are now. The red portion of the wall was a 7″ recessed
arched panel. Because this space had the recessed arch, my
husband and I went back and forth thinking of ideas on how to fit
built-ins there.  In my mind it was the perfect spot and you see them first thing when you walk in the front door, so no other place would do. Normally you would build them against a flat wall.
Easy peasy. Our first
thought was to tear out the arch way so the built-in units
would fit nicely against the wall and not overlap the tray ceiling. But, after a few test holes in the drywall to see what was back there, we found out the entire arch was plywood. We realized it would be way more work to try to cut that out than just building a stud support system for the arch so that the
Besta units had something to sit flush against and be secured to.


Unfortunately
I don’t have photos of the process since we constructed this before I
started blogging again, but I will walk you through our process.
We used two by fours to create two rectangular frames that fit in the
recessed panel and came out far enough to be even with the pieces of wall on either side
of the panel. We attached these frames to the studs in the wall so that the units would now have something to attach to in the back. Here is my pitiful drawing of what the space looked like with these new support pieces. The X’s are where we attached the supports to the studs in the wall. 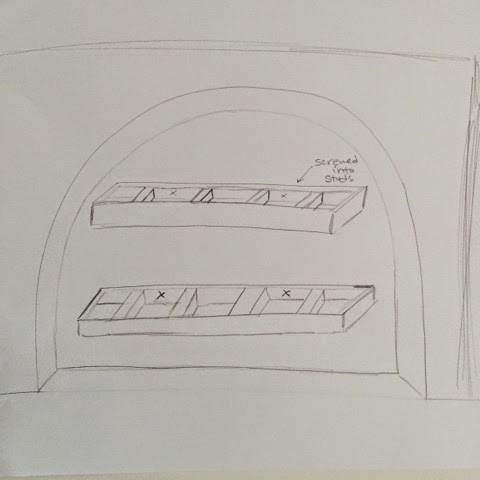 Next
came the Besta units. After researching tons of Ikea built-in hacks
using both Bestas and Billys, I decided to go with the Besta units
because I liked the bottom door options better on those. But this meant
two things. One, was that when the doors were added to the bottom of the
Besta units, the doors were flush with the ground and there wouldn’t be a place
to add baseboard trim to make the units look built-in. To remedy this, we built a base out of two by fours for the Besta units to sit on. It was pretty much a rectangle the same width as all of our units with mid supports where the edges of each Besta would sit. This raised them off the ground enough that the doors could open easily and we could put trim along the bottom. The other issue with the Besta units is that the widest unit that they have is only about 24″. That meant there wouldn’t be room for our TV. An Ikea hack was needed!

To get the double wide Besta for the center of the built-ins, I purchased these two pieces from Ikea:

I then used the top pieces from the double wide unit and the side pieces from the tall unit to create the large center piece. Now that I had the frame, I had to find a backing for the new large unit and some shelves since the backing and shelves that came with the two units were not large enough. This meant a trip to Lowes. The measurements of the new hacked unit were 47 1/4″ by 75 5/8″, so I needed a white back panel that would be large enough to fill that space. Luckily, Lowes has a white hardboard panel that was about 1/4″ thick and 4′ by 8′. I purchased that panel along with two pieces of aspen wood for the new shelves. At home I cut the shelves to size and routed out little spaces for the shelf brace pieces to fit. I then cut the hard board to my 47.25″ and 75.625″ dimensions using my Dremel Saw Max. The last step in this hack was to cut away a portion of the back groove in the Besta where the back panel went because my 1/4″ panel was a little bit larger than the opening in the Besta. But once that was done, the panel slid in and the shelves got added and the hack portion was done. You can see this unit in the middle here. (I know this is a lot of confusing detail, but just look how pretty!). Once all the other Besta units were assembled (there are three more of those short, wide units at the top, and four more of the tall but skinny units on the bottom). I set them in place on top of my 2 by 4 base that I created. The bottom units went first and were attached to the wall and new stud panel we created in the recessed arch with some L-brackets. Then the top units were added and attached to the wall with more L-brackets.

I cut a hole in the bottom portion of the hard board in the TV unit piece to access the outlet and cable line and the cords just come up between the shelf and the back hard board piece.

The final step was adding the doors, hardware, and trim. For the doors I went with the Hanviken door (looks like a plain shaker style door) and for the hardware, I splurged and got rectangular brass pulls by Lewis Dolin at the Hardware Hut for $14 each. I think they look good and add some unique character to a plain Ikea piece. Here is a similar Amazon option. I used a brad nail gun to attach the trim, the crown, and the baseboard to the unit. For the side pieces, I attached a small piece of 1 by 2 to the wall at the studs so that I had something to attach the mdf trim between the wall and the side of the built-in.

After all the trim was cut and nailed on, I used caulk to fill in the nail holes, gaps between the trim pieces, and the extra shelf holes. The final step is to paint the primed mdf trim to match the Besta paint, but I haven’t done that step yet. I will let you know when I do and what method works the best.

Hopefully this post wasn’t too confusing. It was a long process that took a couple of weeks for us, but I am so thrilled with the results! And I think once I add everything up, it cost less than $1000 for a super custom looking built-in wall. The short version: built frames to attach to the back, built a frame for them to sit on, put them all in place, secured them, put on molding and trim, put on handles, and caulked the gaps.

This was the first time we tried something this epic, so if you’ve got a similar project that you’re kind of dreading, just make sure you take your time and measure everything out accurately.  Also, think the whole project through (how will this attach to this? where will this fit? what will cover up this gap?) before you get started.  We’ve had plenty of projects that we got knee-deep in only to realize we forgot/missed/measured badly and had to backtrack.  That’s part of the process, but mapping it out as best you can beforehand can save you some potential headaches.